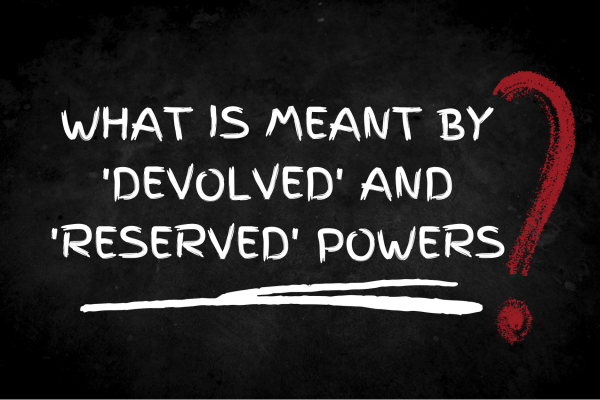 What is meant by 'devolved' and 'reserved' powers?

Under the UK’s devolution system powers are divided into two categories - devolved and reserved. In devolved areas, decisions are made by the parliaments and governments in Scotland, Wales and Northern Ireland, while in reserved areas decisions are made by the UK parliament and government. Devolution laws passed by the UK parliament list which matters are reserved (in Northern Ireland, some of these are known as excepted powers). Where a policy area is not reserved, the power to make decisions in that area lies with the devolved institutions.

Reserved powers include those relating to the UK’s external affairs such as foreign relations and defence, as well as the constitution, immigration and many aspects of economic policy. This means that only the UK parliament and government can make decisions on these matters. Policing and justice are reserved powers under the Welsh devolution system, but these are devolved matters in Scotland and Northern Ireland. Social security benefits are entirely reserved in Wales, but partially devolved in Scotland and entirely devolved in Northern Ireland.

Control over key public services, such as health and education systems, are mostly devolved. Other areas where powers are mostly devolved include the environment, agriculture, culture, local government and public transport. This means that the Scottish Parliament, the Senedd (the Welsh Parliament) and the Northern Ireland Assembly can make laws on these matters. Because the UK parliament is considered sovereign, it can still make laws in these areas for Scotland, Wales and Northern Ireland if it wishes to. However, by convention, it usually avoids doing so except by agreement of the devolved institutions. The UK parliament and government make these policy decisions for England, which does not have a devolved parliament.